From the thrilling pirouettes of male dancers in drag, with brilliant and innovative choreography to side splitting humor presented in specially-designed lavish costumes, Victor Trevino’s hit Men in Pink Tights is a show designed for all audiences.

The ultimate send up of both classical and contemporary ballet, Men in Pink Tights combines  brilliant dancing technique, tongue in cheek and blatant humor with intentional foibles, dancing mishaps and of course hissy fits by men playing both male and female roles creates great entertainment.

Les Ballets Eloelle is one of the few all male comedy ballet companies in the world. Its mission is to create, present, preserve and extend comedic repertoire of classical and contemporary dancing, through performances of the highest quality, presented to the widest possible audience. Artistic Director Victor Trevino said: “Les Ballets Eloelle is committed to the core art form of ballet and promoting it through the comedic tradition of male comedy ballet”.

The programme will include the Company’s signature work with the Cast bringing their own brand of humor to the roles: Swan Lake Act II, Pas de Quatre, Minkus Gala and the George Balanchine creation Go For Barocco. The show will also feature duets from both classical and neo-classical origins showcasing a combination of pyrotechnics and comedy, while adhering to the spirit of the originals. They include Spartacus, Grande Tarantelle, Romeo and Juliet, La Corsaire, Harlequinade and another signature work The Dying Swan.
‍
So be prepared to Laugh Out Loud and BOOK NOW. 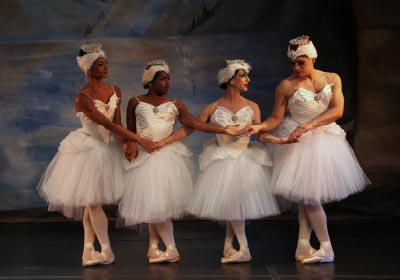